There are five basic processes of producing oxygen and nitrogen, which include compression, purification, cooling, separation and cylinder filling 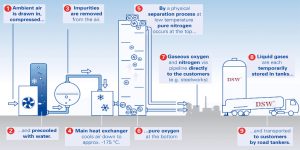 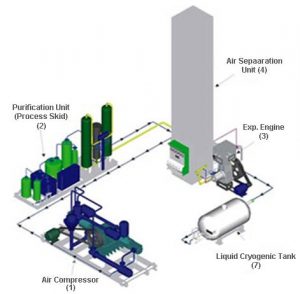 Liquid oxygen plant (LOX) is an industrial system that taps air from atmosphere which is then compressed in the air compressor.  After being compressed, the air is put into a cleanup system where impurities such as carbon dioxide, hydrocarbons and moisture are removed.  Then, the air is directed into a heat exchanger where it gets cooled to cryogenic temperatures. Here, the air is directed into the high pressure distillation column where oxygen is formed at the top of the column and nitrogen is formed at the bottom.  Liquid oxygen plant is fabricated & designed as per the standard designing principles. We manufacture liquid oxygen (LOX) as per internationally approved standards.

Cryogenic oxygen plant is an efficient industrial system for generating liquid oxygen (LOX, which is a cryogenic liquid. Our manufacturing and fabricating of LOX plants is done as per the American Society of Mechanical Engineers (ASME) standards. It is designed and fabricated with premium materials and components which can withstand the process temperatures and pressures. Cryogenic liquid is a liquefied gas that have a normal boiling point below –130°F (–90°C). LOX has a boiling point of –297°F (–183°C). We are preferred for offering the best cryogenic oxygen plant cost in the Industrial gas market in china.